« Columbus Day
Actor, Producer And Writer Tony Lo Bianco Honored By The Italian American One… »
Attention all ONE VOICE activists, Coalition Organizations, and All Italians and Italian Americans!

Do you recall how the US and the world mourned for France during their loss at the hand of terrorists?  Well that appears to be a ONE WAY street when it comes to the French group Charlie Hebdo and their ABSOLUTE INSENSITIVITY and CRASS portrayal of the many, many victims and survivors of the tragedy of Italy’s Earthquake!!!  What a complete DISGRACE!  Their caricatures of dead Italians in collapsed buildings like a lasagna and the burned and bloody faces of Italian victims as crudely named pasta dishes is just too much to bear.  Freedom of the press is one thing, but horrible insensitivity is quite disturbing.  Don’t you agree!?!

This caricature below published by Charlie Hebdo after getting a lot of flak from Italy yesterday. This was Charlie Hebdo’s response, which for me is even more outrageous! This one translates from French: “Italians… It’s not Charlie Hebdo who constructed your homes, it’s the mafia!” 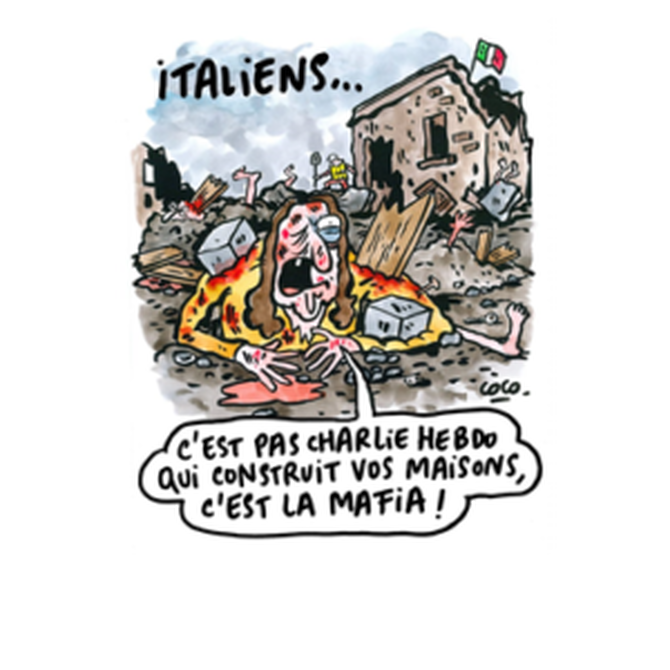 Look at the caricatures of the old fashioned Italian stereotypes with big noses on all the pics. The mafia didn’t construct those ancient buildings. I was just browsing through google of Responses around Europe especially Italy. The mayor of Amatrice was interviewed & is really taken back by Charlie Hebdo. Lastyear From Italy there was such an outpouring of sorrow after the shootings at the Charlie Hebdo offices. 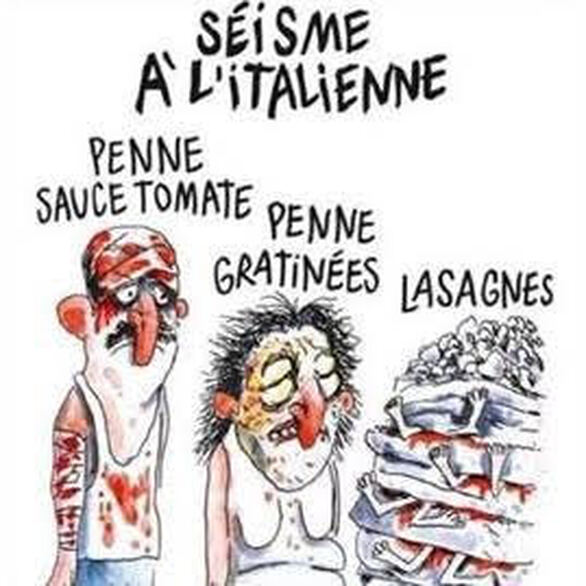 If so, please email Charlie Hebdo right away. abo.charlie@ediis.fr

03.44.62.52.94
​Last night I was appalled to see the latest Charlie Hebdo cartoon (satire?) which was published in France the week. This article has appeared on BBC, La Stampa, Corriere della Sera and even CNN last night.  I found it very disrespectful considering all the destruction & deaths in Amatrice & the other nearby italian villages. Most of the flattened homes with the majority of the deaths were centuries old and which the mafia couldn’t be responsible for the construction.  Yes, there were some public buildings of more recent construction which also collapsed (which may be due to shoddy construction), but most of the deaths were in the ancient homes in the middle of the night as the victims were sleeping. So many innocents. Amatrice is famous in Italy for it’s cooking (Pasta Amatriciana etc).

Here are some news stories about it

​You may also want to send your comments to:

ONE VOICE IS PLACING CHARLIE HEBDO ON OUR WALL OF SHAME